Home » The end of the road – two approaches to street naming 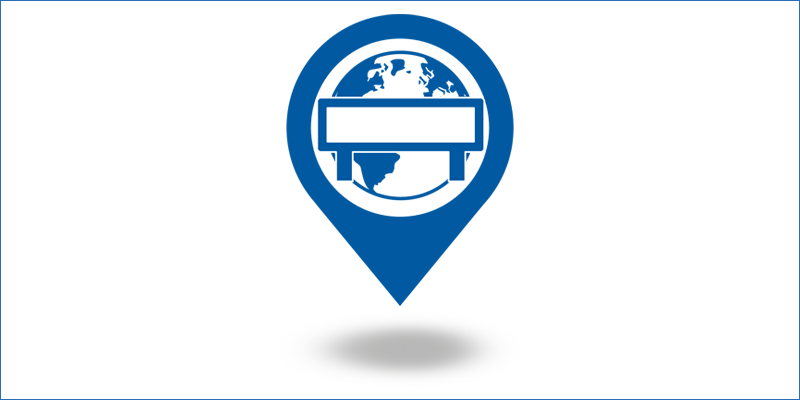 Introducing street naming systems to countries for the first time can lead to conflict between logic and practicality, as Dinesh Thanigasalam of Aligned Assets has discovered

Where does a street start and where does it end? This is something most of us take for granted. But it can be an issue in more than 100 countries in the world where there is no street-naming convention in place, especially when the government decides to rectify this situation. Determining the start and end of a street is one of the key decisions that needs to be made, and anyone involved in the process of street naming and numbering will quickly realise it is not at all straightforward.

A strong argument can be made for treating each segment as a street in its own right and giving each one its own name. Such an approach is easy to understand and follows an obvious logic. It can be applied across even the most complicated street networks without too much difficulty, and it is also relatively easy to give each street a name if applying an automated algorithm to derive the street name using a numeric-based convention, i.e. 1st Street, 2nd Street etc.

The following diagram illustrates a result of taking this approach: 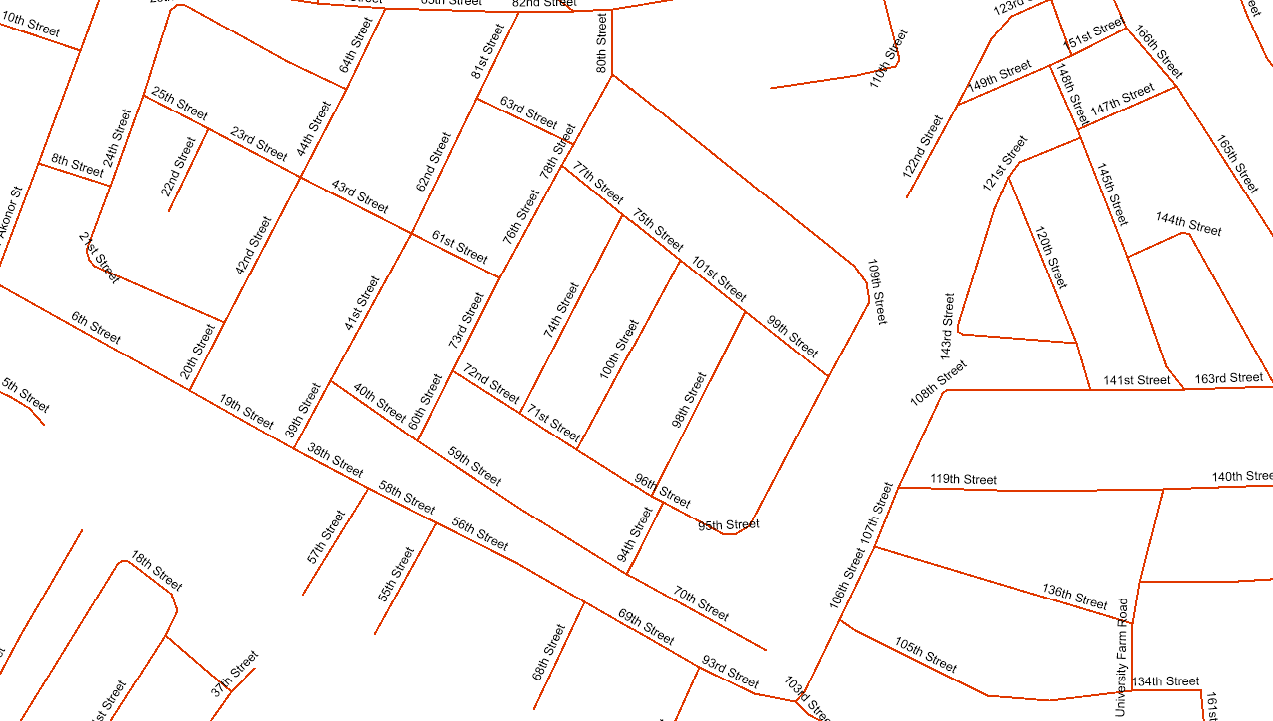 It does, however, have the practical disadvantage of generating a very large number of streets, some of which can be quite short, creating logistical issues with street signage. It is also more likely to diverge from street-naming conventions already in existence at a local level. There is often resistance to street names being imposed on people, and giving each segment a separate name is likely to exacerbate this.

However, it is worth noting that individually defining each segment is useful even if you eventually decide to treat multiple segments as one street. Capturing each one as a different object in a GIS (geographic information system) or address management system gives you flexibility on the naming convention. It also allows you to assign different attributes to each segment such as width, surface, direction of traffic, postcode, etc, even though the segments may belong to the same named street.

An alternate approach to street naming is to treat multiple sequential segments as one street. This is generally more user-friendly, and used in most countries that already have established street naming systems. Crucially, it results in a smaller number of named streets – often by a factor of three or four. In Ghana, where Aligned Assets was involved in allocating an official name to every street in the country, we were dealing with somewhere in the region of 1 million streets, so such a variation would have made a significant difference. While it may have relatively little effect on an automated numeric-based street-naming process, fewer separate names makes signage easier and also makes naming more manageable if delegated to a local authority.

Using Approach Two for the same area as shown above results in: 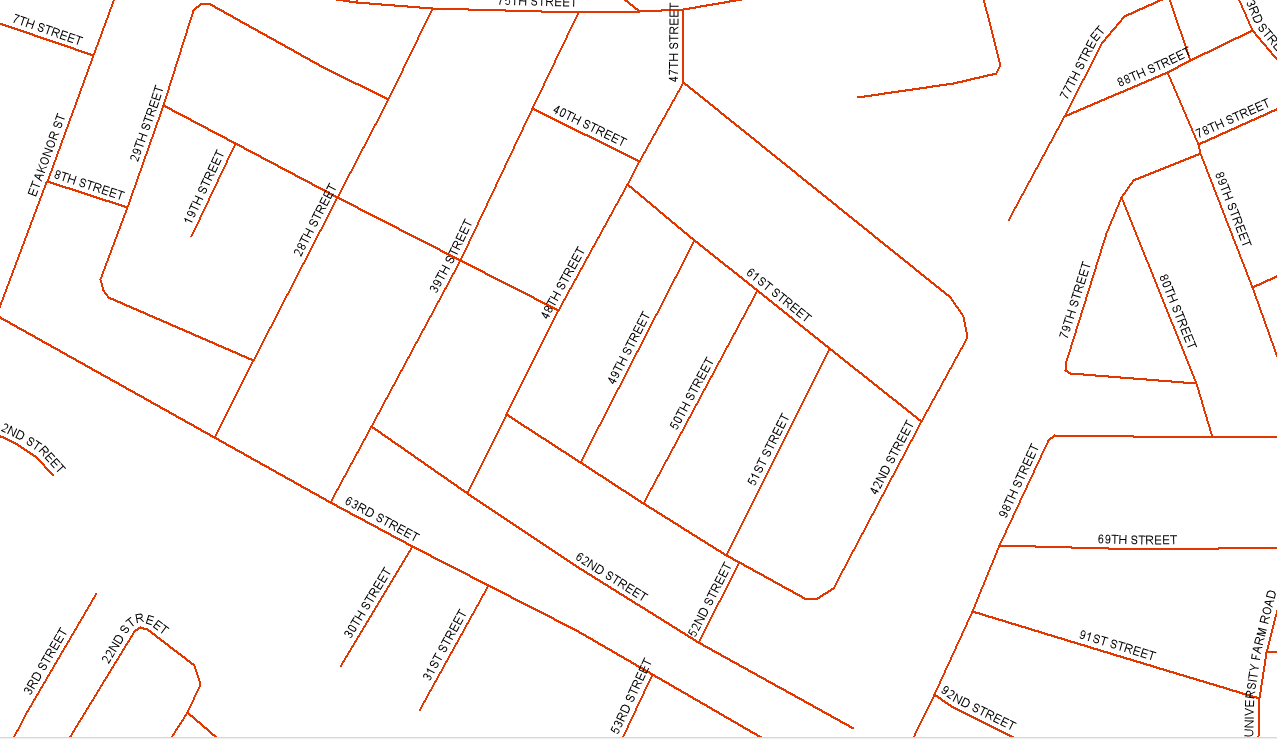 But this approach is also more complex. Exact rules as to where a street starts and ends need to be established to ensure consistency, especially if this process is to be automated (this will be looked at more closely in a future blog). If the process is carried out manually, the necessary field and surveying work will be considerable. No matter what rules are put in place, what appears logical will often be questioned by citizens as well as by the services that use the street network. What seems rational digitally often makes no sense on the ground. For example an algorithm may dictate that if a street varies in angle by more than 20 degrees it should be given a new name at that point, but on practical inspection it may become very obvious that it is a continuation of the same street.

A process then needs to be put in place to alter the allocation of street segments to a particular street when such an anomaly arises.

Nevertheless, in Ghana we have opted for this second approach as seen here: http://streetnamingandnumberinginghana.blogspot.co.uk/.

We made this decision after modelling both approaches on a sample area of Accra followed by visual inspection of the results. Unsurprisingly, the number of streets generated by Approach One was considerably larger than when using Approach Two. The density of the streets also resulted in very small street segments being treated as streets in their own right even when they didn’t contain any settlements. This felt instinctively wrong. It was unlikely that any commerce or services would be supplied directly to such segments, yet they would still have needed the street to be maintained and provided with street signage. Why incur the overhead? A caveat is that while this approach seems appropriate for dense urban areas within Accra, it might in fact work very well for more sparsely populated rural areas.

In summary, it remains worth considering both approaches when naming streets, but by applying them to a sample area you can discover which gives the most satisfactory result. If planning to automate the naming process, be aware the algorithm for Approach Two is not straightforward and will never give a 100% perfect result. This needs to be factored into the decision, and additional time allocated for implementation.

For more information on this subject, there are various conventions and guidelines contained within the British Standards. Please see the following document and search for ESU or Elementary Street Unit:
https://www.geoplace.co.uk/helpdesk/library/technical-guidance-streets

The World Bank also has material that covers this topic:
http://siteresources.worldbank.org/CMUDLP/Resources/461753-1160058503655/Street_Addressing_Manual.

Aligned Assets Ltd also has a Street Naming and Numbering toolkit that can automate the naming of streets and can implement either Approach One or Approach Two. See our product page for more information: SNN International